December 13, 2015
In October 2015 I developed Xtegos - Voices for Whatsapp as a weekend project. Xtegos is a mobile app to read messages with funny foreign accents and share them on Whatsapp as voice messages. 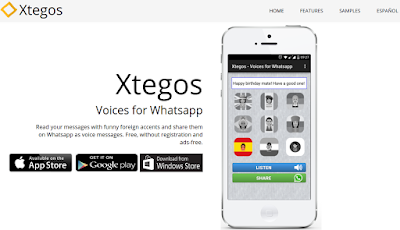 After launching the MVP for Android, I wanted to test the following assumptions:


In order to achieve some customer base, I implemented the following marketing strategies:
Strategies A, B and C were quite successful during the first few days, and helped Xtegos get its first 100 users, with many 5-star reviews (most from friends of mine). Some Whatsapp groups I am part of started sharing voice messages and the organic growth worked smoothly. However, after a week or so, the illusion was over. Xtegos was not sticky nor viral.

I went back to the lab, improved the UX, added new voices and launched the iOS and Windows Phone versions with Phonegap (as requested by some users). Then I used strategy D with mixed results: I got a few hundreds of new installations but 70% of them uninstalled the app immediately, and some of them gave Xtegos a bad review. Nobody likes lies, and if you say "Selected as one of the top 10 free apps in 2015" they would expect something ground-breaking, which was not the case.

In view of the results, I decided not to proceed with strategy E. I'll use that silver bullet once I have fixed the problems I have observed. The least thing I want right now is a bad review in a specialized blog.

What I learnt from this experience:
As a consequence, I am going back to the lab and implement a new version with the outcome of this learning experience.